Lighting the only thing that could stop Orange County in another dominant victory.

Orange County Soccer Club traveled to New Mexico for the first time to take on expansion side New Mexico United. This was an important game, as both teams were looking to keep themselves in the playoff hunt. Despite New Mexico’s early season success, they sat just one point ahead of Orange County entering the match. 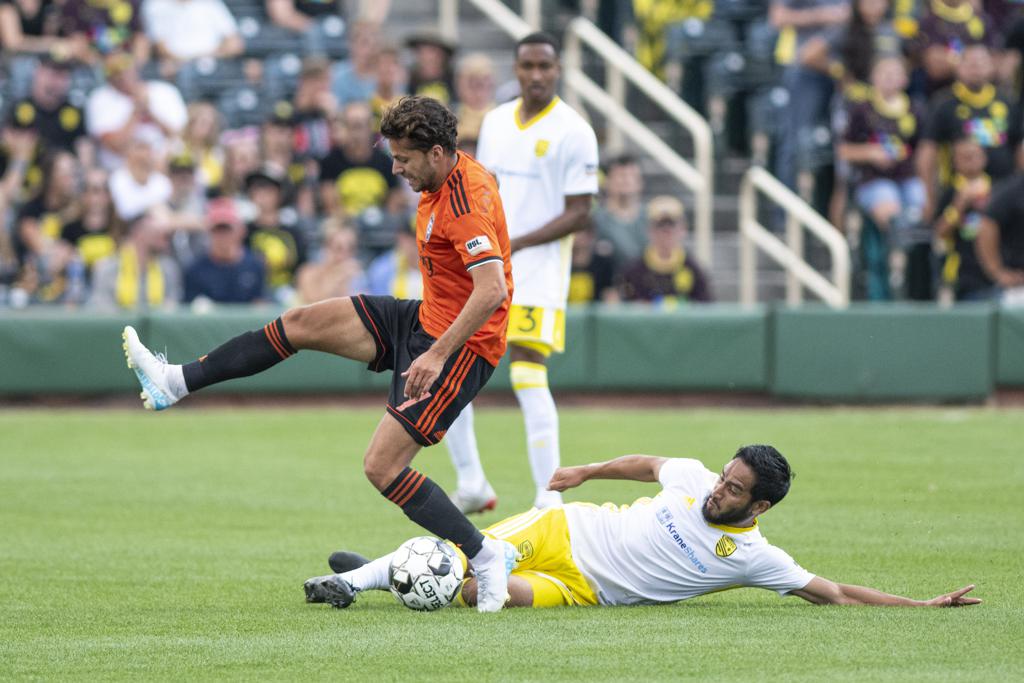 Michael Seaton and Darwin Jones both had opportunities early in the first half. In the 10th minute, Aodhan Quinn sent in a perfect corner and Seaton had an open header, but the ball spun wide to the left of the post. In the 23rd minute, defender Michael Orozco put a beautiful ball over the top of the New Mexico line and it dropped in for Seaton as he streaked in on goal. Unfortunately, New Mexico keeper Cody Mizell was up for the challenge and got enough of the ball to keep it out of the net.

It was Jones’s turn in the 27th minute, when Seaton put him in. Jones made a few moves and cut it back toward goal, but the ball took a bobble on the turf and it caused his shot to go high and wide to end the threat.

New Mexico did have a few chances of their own, but newly signed keeper Frederik Due came up big in his first start for the Orange and Black. In the 16th minute, he stepped up and blocked a shot from Santi Moar. In the 36th minute, New Mexico had a free kick that was put straight on goal, and Due was able to read the shot and put it over the crossbar. Both sides went into half time with missed chances, but no goals.

The second half saw Orange County continue to look good on both sides of the ball. New Mexico put pressure on the back line, but Orange County was up for the challenge against a good New Mexico side.

The 52nd minute saw the first breakthrough of the game when Darwin Jones held up the ball and saw a streaking Jerry van Wolfgang and played him in perfectly. van Wolfgang took the ball, set it onto his right foot, and easily slid it to the far post to strike first.

Just three minutes later, Orange County absorbed the New Mexico attack and sprung into action yet again. This time it was a beautiful assist from Harry Forrester, who nutmegged United defender Justin Schmidt with a simple pass that Michael Seaton met and buried at the near post to double the OC lead.

In the 80th minute it looked like New Mexico had a really good chance in on goal, but Devon Sandoval was called for a foul on Frederick Due at the top of the 18. OC seemed happy to sit back and defend for the last ten minutes of regulation, seldom breaking forward and playing cautiously. But the attack could not resist one last go and the team broke away again right at the end of regulation. Darwin Jones put a great ball into van Wolfgang, but this time the Dutchman’s shot went over the bar.

Orange County put together probably their most complete away match to shut out New Mexico and place themselves squarely into playoff contention, rising to seventh. This dominant performance saw great defending, big saves from debutant Due, and a multiheaded attack that has outscored their opponents 8-1 in the last three matches.

Orange County will face another tough road test next Sunday against another playoff team in Portland Timbers 2, who are coming off of a big 3-1 road win against Reno 1868. The game will kick off next Sunday at 2:00 pm at Providence Park in Portland, OR.