Orange County Soccer Club is in the playoffs. That much we know.

But with one regular season game remaining on the schedule throughout the United Soccer League’s Western Conference, that’s really about all we know.

What’s one thing we do know? Saturday promises to be one of the wildest days in league history. And when the final horn sounds at Championship Stadium around 9 p.m. Saturday night to conclude Orange County’s game against Fresno FC, then and only then will OCSC finally know when and where they will open the 2019 postseason.

Entering play Saturday across the league, OCSC could end up in a wide range of postseason scenarios, from as high as the No. 4 seed and a quarterfinal matchup at home next weekend against No. 5 Real Monarchs SLC, to the 8th-seed and a mid-week play-in game just to face one of the top seeds on the road in next weekend’s quarterfinals.

Regardless, OCSC head coach Braeden Cloutier is keeping his team focused on the task at hand: Beating Fresno FC. 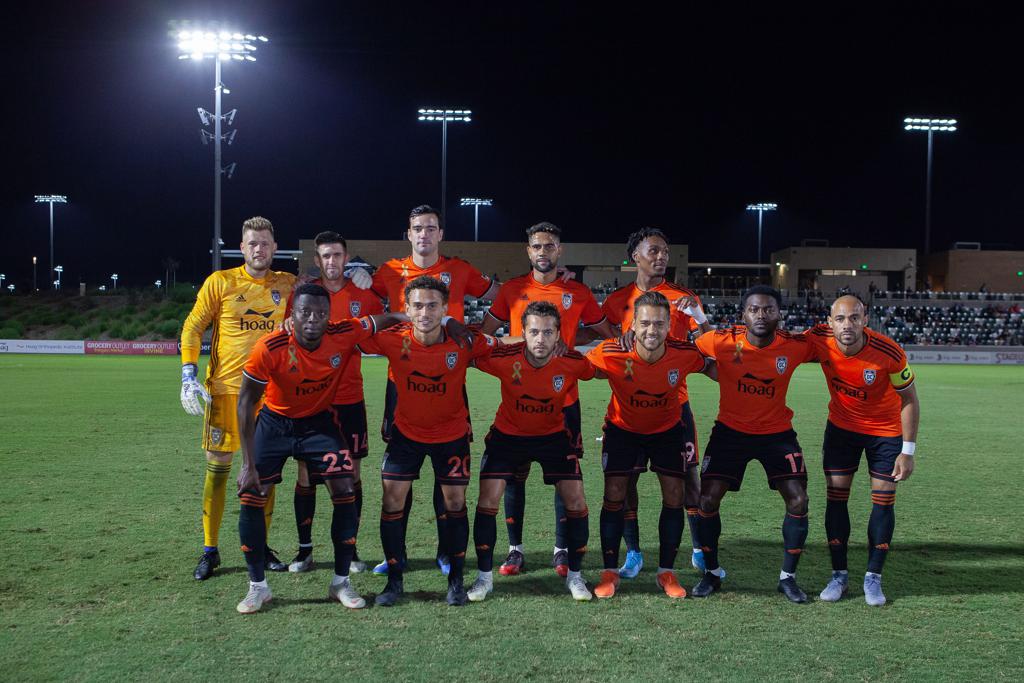 “[Playoff seeding] in the back of everybody’s minds, but ultimately, it’s about winning,” Cloutier said, “I think before the Oklahoma game [on Oct. 5], it was like, ‘Tonight is about the first game of the playoffs.’ We needed to get into the playoffs, but that was about playoff mentality. Same thing when we went to Salt Lake last Wednesday and same thing on Saturday night. The playoffs have already started for us. “That’s the mentality we have and Saturday is no different. We go into it knowing we need to win and if we take care of business, we go into next week where we need to win to keep going and hopefully get into the championship game.”

When Real Monarchs SLC tied with Austin Bold FC on Wednesday night, it left the door open for OCSC to clinch the No. 4 seed Saturday night. Real Monarchs had led OCSC for the fourth seed by a single point entering Wednesday’s game, and would have clinched the spot – and home-field advantage for the quarterfinal round – with a victory and three points.

Instead, Real Monarchs got one point for the draw and a season total of 53, just two points ahead of OCSC (51). Now the scenario remains in play where Orange County claims the No. 4 seed with a Monarchs loss and an OCSC victory on Saturday.

A less likely scenario could also give OCSC the 4-seed. If Real Monarchs ties Sacramento Republic FC and OCSC wins, the two teams finish with identical 14-10-9 records. But if OCSC outscores Fresno by seven goals, OCSC wins the goal-differential tiebreaker and claims the No. 4 seed.

Whether the No. 4 seed is available to OCSC will be known well before they kick off Saturday night. Real Monarchs SLC plays in Sacramento at noon, PT, on Saturday, seven hours before the start of play at Championship Stadium. Interestingly, if Sacramento wins, it keeps OCSC’s hopes alive for the No. 4 seed. But at the same time, it opens wide a trap door that could find OCSC falling all the way down to the No. 7 or 8 seed, and into the dreaded play-in games early next week.

Only the top six seeds are guaranteed spots directly into Western Conference quarterfinal round next weekend. Teams seeded 7-through-10 must endure a mid-week play-in game in order to claim the final two quarterfinal slots.

And because the standings are so tightly bunched entering Saturday’s final regular season games, the possibility still exists for currently-5th-seeded OCSC to drop out of the top six altogether with a loss on Saturday – and Sacramento holds part of the key to that scenario.

Currently, Sacramento sits in a tie for seventh with Austin Bold with 48 points, three behind OCSC. Sitting sixth, just one point behind OCSC, is El Paso with 50 points.

If Sacramento beats Real Monarch early Saturday afternoon, it moves OCSC temporarily down to the 6-seed by tying with 51 points overall, but holding the tiebreaker with 15 overall wins, to OCSC’s 14. El Paso, whose game with LA Galaxy II starts at 5 p.m. PT, could also move ahead of OCSC with a win, forcing OCSC to beat No. 3-seed Fresno in order to stay out of the play-in games.

Even Austin Bold FC could finish ahead if OSCS loses Saturday. In this scenario, Austin Bold and OCSC finish with 51 points and 14 wins. Currently, OCSC leads in goal differential by 6. But a big loss for OCSC and a big win for Austin could tip the tiebreaker Austin’s way.

Should Sacramento lose Saturday, the door to the 4th-seed would be closed shut for OCSC, but a spot among the top six seeds would be virtually guaranteed, even if OCSC lost to Fresno, as long as either El Paso ties or loses or Austin wins but does not overtake OCSC in goal differential.

So many moving parts. So many scenarios. Cloutier is determined to keep his players’ heads focused on the task at hand.

With tie AND El Paso tie or loss

Clinches no worse than 6th

With win or tie