It is perhaps no surprise that Orange County and Real Monarchs SLC are meeting squarely in the middle of the Western Conference quarterfinals in the USL Championship playoffs. Throughout the brief history of the rivalry, Orange County and Salt Lake have been virtually even with each other. It was no different in 2019, with each team winning regular-season matches at home. 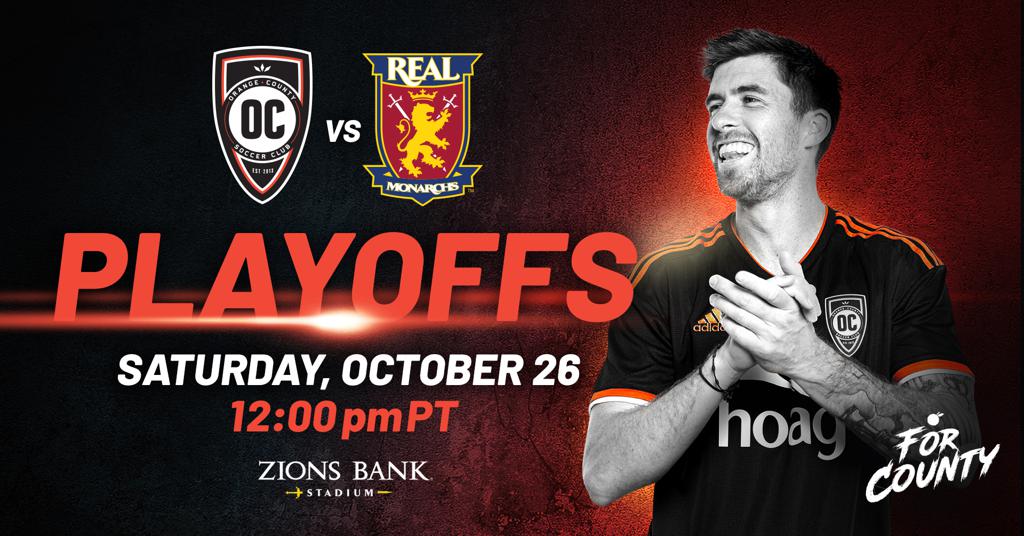 Orange County, the No. 5 seed, will travel to Herriman, Utah, for Saturday’s game against No. 4 Real Monarchs, with kickoff at Noon, PT at Zions Bank Stadium.

Orange County is 6-4-1 lifetime against Real Monarchs SLC since the Monarchs joined USL Championship in 2015. But OCSC is only 2-3-1 against the Monarchs in Utah, with the most-recent victory coming in 2016.

This will be the first time Orange County has played a road playoff game since 2016, when as the No. 8-seed, OC knocked off top-seeded Sacramento in a shootout (5-4) in the Western Conference quarterfinals, then lost 2-1 to the Swope Park Rangers in the conference semis.

The other two times OC has reached the playoffs before this season, in 2018 and ’15, they were the top seed in the Western Conference and played only home games, reaching the conference finals last season before losing to Phoenix Rising FC, 2-1, at Championship Stadium.

This season, true to form, Orange County and Real Monarchs split their two matchups, with the home team claiming victory in each. Here is a look back at the two matchups:

Orange County entered this match having won its previous game against Las Vegas, but after 24 weeks, their overall record sat at a frustrating 7-9-8, and after ending the 2018 season as the No. 1 seed in the West, the 2019 team was scrambling for its playoff lives.

So, it was perhaps this 3-1 victory over Real Monarchs, more than any other game all season, that righted the ship and pointed Orange County toward a playoff berth and the No. 5 seed. This Week 25 victory gave Orange County back-to-back wins for just the second time all season -- the first such pair coming in Weeks 5 and 6 – and laid the foundation for a five-game winning streak and a 9-0-2 finish overall to the regular season.

Michael Orozco opened the scoring in the 28th minute, heading home a corner kick by Aodhan Quinn for a 1-0 Orange County lead. This came 20 minutes after Aaron Cervantes made the save of the game, diving to deflect what appeared to be an easy one-timer by Maikel Chang over the crossbar to keep the game scoreless.

Ten minutes after Orozco’s goal, Darwin James made it 2-0 after taking a brilliant feed from Harry Forrester and beating Monarchs goalie Andrew Putna for the goal. Early in the second half, Quinn scored after a handball violation for a 3-0 lead. Kalen Ryden disrupted the clean sheet in the 61st minute, but Orange County secured the critical three points to keep their momentum going into the final third of the season.

It was Real Monarch SLC’s turn enjoy the postseason implications of a victory, clinching a berth in the 2019 playoffs with a 2-0 win over Orange County.

Aodhan Quinn and Makiel Chang, who both featured prominently in the first meeting between the teams, would see their fortunes reversed in the rematch. Quinn, who scored one goal and assisted on another back in Week 25, was the unfortunate victim of bad luck this time. With the game scoreless entering the 73rd minute, Real Monarchs Tate Schmitt sent a low cross into the box from the left side that Quinn turned into his own net for an own goal and a 1-0 SLC lead.

Ten minutes later, Chang put the game away with a his 12th goal of the season. Coming with just two games remaining in the regular season, the victory effectively sealed the No. 4 seed and home-field advantage in the quarterfinals for Real Monarchs, who earned three points for the win and ended the season two points ahead of Orange County for the fourth-seed