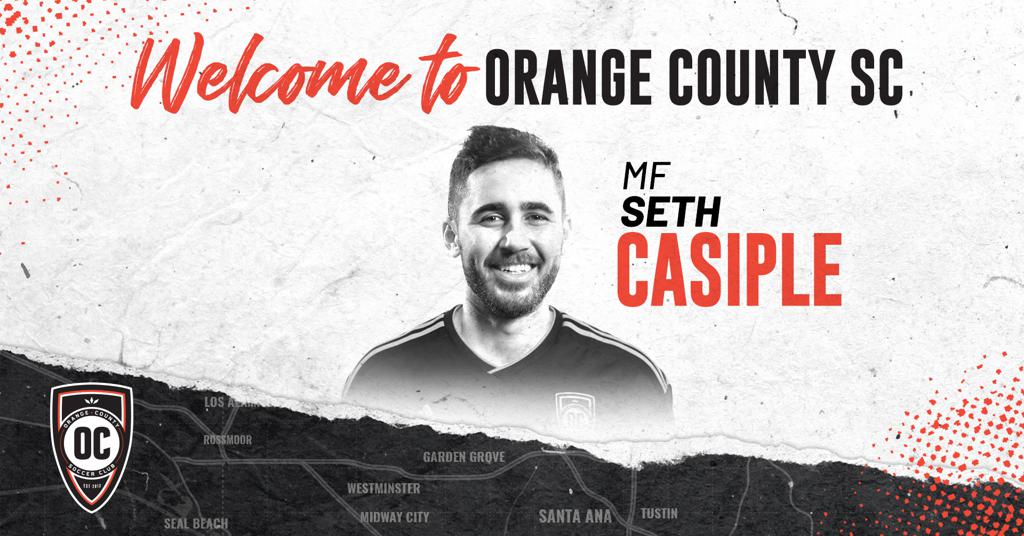 “I have been a big fan of Seth these past several seasons and when I had the chance to get him I jumped on the opportunity right away,” said OCSC Head Coach, Braeden Cloutier. “He is a forward-thinking player with exceptional passing abilities that will compliment how we play and the players we have.”

Casiple, 26, spent his college career at the University of California at Berkeley, where he made 74 appearances with the Golden Bears scoring a total of six goals and 27 assists. Casiple came to Reno 1868 FC from Portland, in February 2017.

“I’m very excited to be joining OCSC and its community,” said Seth Casiple. “I can’t wait to join the group and get to work in Orange County. I think this is a great opportunity and I hope to make a positive impact on and off the field.”

Casiple was selected by the Portland Timbers in the 2015 MLS SuperDraft. After being released, Casiple signed on with Portland Timbers 2 of the USL. In his debut with the club, he assisted two goals in a 2-0 victory over Premier Development League club Michigan Bucks in the third round of the 2015 Lamar Hunt U.S. Open Cup.

“We are excited to add Seth, a proven USL player to our roster,” said OCSC President of Soccer Operations, Oliver Wyss. ”Seth will add a lot of quality to our already talented midfield and his leadership and experience will have a significant impact on our team.”

Orange County Soccer Club is Orange County’s only professional soccer team that is part of the United Soccer League (USL), the fastest growing Division II professional soccer league in the world.  The USL is comprised of 36 teams across the United States.  The team plays its home games at the Orange County Great Park’s Championship Soccer Stadium, located in Irvine, CA.  Nestled in the heart of the Great Park, Championship Soccer Stadium has a capacity of over 5,000 for Orange County SC matches. Orange County SC was one of 12 founding members of the USL during its inaugural 2011 season. The preceding club, Orange County Blues, won the 2015 Western Conference Regular Season Championship and reached the Western Conference Semi-Finals of the USL Playoffs in back-to-back seasons.  Team owner and Chief Investment Officer of LARO Properties, James Keston, purchased and re-branded the team in 2017.  Keston, who actively oversees all operations of the team, is dedicated to providing a pathway to professional soccer and a world-class soccer organization that focuses on the fans, players and youth clubs of Orange County.