They braved the pre-Christmas chill for the festive fun of Orange County WinterFest back on Dec. 19. Dozens of Orange County Soccer Club season-ticket holders were the invited and honored guests at the team’s year-ending holiday party, replete with stocking stuffers, a meet-and-greet with team players and front office executives, and a Journey tribute band called Escape.
And while the band offered up its rendition of “Separate Ways,” such sentiment was not on the minds of the gathered crowd. Indeed, these Orange County fans – many of whom had purchased season tickets for the first time in 2019 -- were all in to renew for 2020. 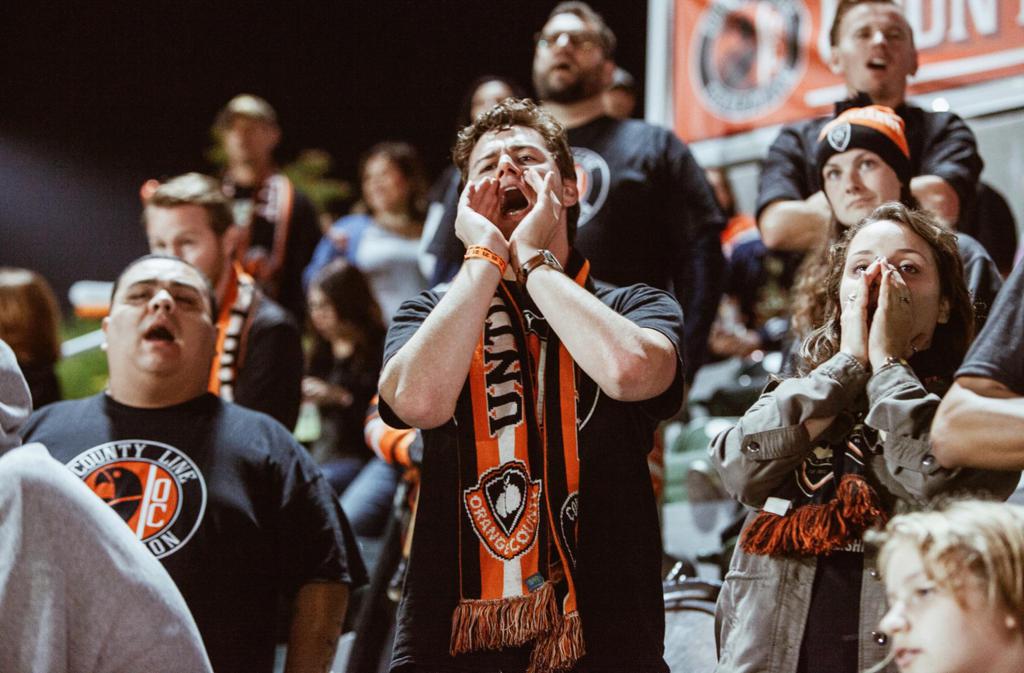 While the season on the field may have ended prematurely with a first-round playoff loss, no one in attendance at the Orange County Fairgrounds had stopped believing.

“It’s been excellent. Great family fun,” said Marcus Vallejos of Mission Viejo. “We schedule everything around the games, and I never thought we’d do that. We catch every game. Now, the kids, if they get an offer to go to a birthday party, they’d rather go to the game. It’s a whole family affair. It’s more than just the soccer.”

Heading into the 2020 season, Orange County expects to renew over 90 percent of last year’s season-ticket holders. As of New Year’s Day, the team had already surpassed the 2019 total of new season-ticket sales. Over the past two seasons, OCSC has seen an attendance growth of 24 percent, according to President of Business Operations Jeff Garner.

“I’ve found that in soccer, more than any other sport, your atmosphere, your experience is all dictated by your fans, and your season-ticket holders,” Garner said. “So, the importance of our season-ticket base in a stadium of 5,000-plus, is critical. We do really well on the group sales side, but season tickets is something we need to continue to grow.

“It affects more than just how many are in the seats and how it looks. It’s the feel and the heartbeat. They care about the brand and the team, the players, and we care about them. That’s what we need to build our foundation on.”

The holiday party was just one way the team showed their season-ticket holders that appreciation. Among the players attending were Michael Orozco, Aaron Cervantes, Diego Lopez, Edson Alvarado, head coach Braeden Cloutier and general manager Oliver Wyss. All of them took time to mingle with their fans and sign autographs.

Vallejos, who purchased his season tickets before last season and is renewing for 2020, attended the party with his 9-year-old daughter, Kate.

“I like watching the team win and cheering them on,” Kate said. “Getting shirts, getting jackets, and it’s fun to watch them win.”

But winning is merely the cherry atop the soccer sundae for the front-office staff. For them, the game isn’t really the thing.

“We’re not in the soccer business, we’re in the memory-making business,” Garner said. “We’re there to create memories and experiences for families -- dads and daughters, moms and sons -- and create a sense of community rallied around the Orange County Soccer Club. If you love soccer, or you enjoy a night out with the family, put down the screens for a couple of hours at affordable prices, that’s what we’re here for. I’m happy our season-ticket holders see the effort we’re putting in to make it an experience, not just a match.”

Orange County has won over fans of all ages and backgrounds. Another pair of first-year season-ticket holders in 2019 – Melissa and Nigel Sprange of Tustin – were looking for a local sports team to get behind.

Nigel was once was a season-ticket holder for Arsenal of the English Premier League, getting to scratch his soccer itch in his new home city was a welcome opportunity.

And more interaction with the organization. Garner said over the course of last season, the team incorporated roughly a half-dozen season-ticket holder suggestions into the game production. Kids on the Pitch – which allows young fans to go onto the field after a game and interact with the players – was an idea borne from a fan request.

“It’s cool when they take that extra time to talk to you,” Marcus Vallejos said. “After every game, they go by the tunnel, and virtually all the players come out and sign autographs for them. It’s very special.”