As a member of the Orange County Soccer Club, Francis Jacobs exemplifies what the organization terms their “Pathway To Professional.” As a 14-year-old phenom, the youngest player in U.S. history to sign a professional soccer contract, Jacobs’ development as a player with Orange County shows the worth of hard work, training and dedication to the game, on and off the field. But even Jacobs, who turned 15 on Friday, probably never dreamed that path would lead him to the country of Qatar and back. 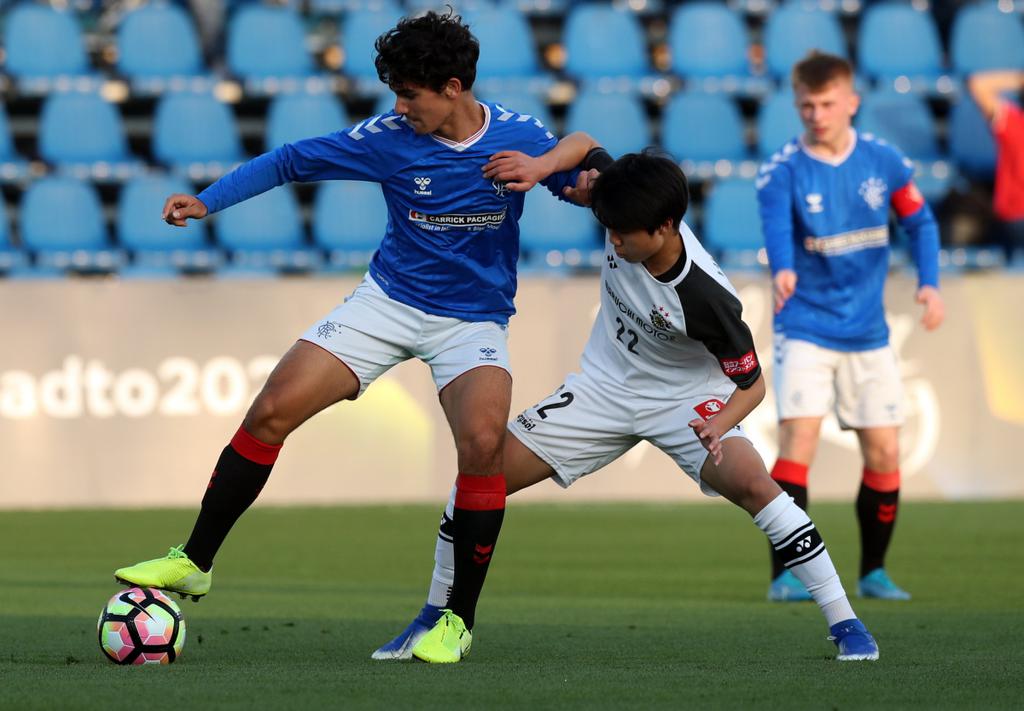 Thanks to Orange County’s recently cemented partnership with the Glasgow Rangers of the Scottish Premiership – and Jacobs’ own exemplary practice and playing acumen during a December training stint in Glasgow, Jacobs was invited to participate in the recently-completed Alkass International Cup in Doha, arguably the most prestigious U-16 tournament in the world.

And Jacobs was more than just equal to the task. Although the Rangers were unable to successfully defend their 2019 championship at Alkass, the team finished with an impressive 5th-place finish, and Jacobs was an integral part of their success, playing in all five of the Rangers’ games and starting the final four, earning high praise from his Glasgow coaches before his return to Orange County earlier this week.

“Francis definitely made the most of this incredible opportunity,” Orange County President of Soccer Operations Oliver Wyss said. “And it shows the remarkable job our coaching staff has done in preparing Francis to put himself in a position to succeed. The daily training with a professional team and the extra work with the staff have paid off for him. To go out there and do so well in a world class youth tournament playing an age group up, exceeded all of our expectations. It shows that our professional development structure is working and paying dividends.”

Francis earned his roster spot after training a week in Glasgow, along with Orange County goalkeeper Aaron Cervantes and forward Diego Lopez, back in December. The opportunity to practice with Rangers FC back in December, shows the partnership is in full effect. Three Rangers loan players – Cammy Palmer, Danny Finlayson and Matthew Shiels – are part of the Orange County SC roster preparing for the March 6 USL opener against El Paso.

“The essence of the Glasgow Rangers partnership is founded on football and player development ,” Wyss said. “ and our young, talented players get the opportunity to be showcased worldwide..”

Francis played in a friendly U-16 match for Glasgow during that December stint and impressed the coaching staff that they added him to their Alkass roster.

“He contributed and the feedback we got from the coaches was very positive,” Wyss said. “The biggest compliment of all is that he started [four] of the games. He was very professional and fit in with their talented team like he was already there for a long time. Francis started preseason with us, played versus MLS & College teams and then flew out to Glasgow. He trained two days with them there and then flew out to Qatar. Dealing well with multiple International flights and different time zones shows he’s very resilient and is taking advantage of his opportunities.”

Jacobs was a big part of the Rangers’ success at the Alkass Cup. They finished 3-1-1 over its five games, and despite a stumble in the quarterfinal round, the Rangers finished strong, capturing 5th place overall – the top position in the eight-team consolation round.

Jacobs, who started and played all of the Rangers’ final four games after entering the tournament opener as a substitute, was a key contributor on the go-ahead goal in the Rangers’ 4-2 victory over Aspire Academy in the fifth-place game on Monday.

The Rangers’ performance over the two weeks of the tournament can be measured in goals, wins and losses. But Francis’ experience and acceleration of the maturation process cannot be quantified and he and Orange County SC have lots to look forward to.