“We pride ourselves at being at the forefront of player development in the United States and our first ever official European transfer is definitely a landmark moment for our club,” said OCSC President of Soccer Operations, Oliver Wyss. ”Bryang is a top talent with a great career in front of him and we are proud to have played our part in his development. At the same time, we are actively working on more exciting European transfers and on signing new top youth prospects to Orange County!” 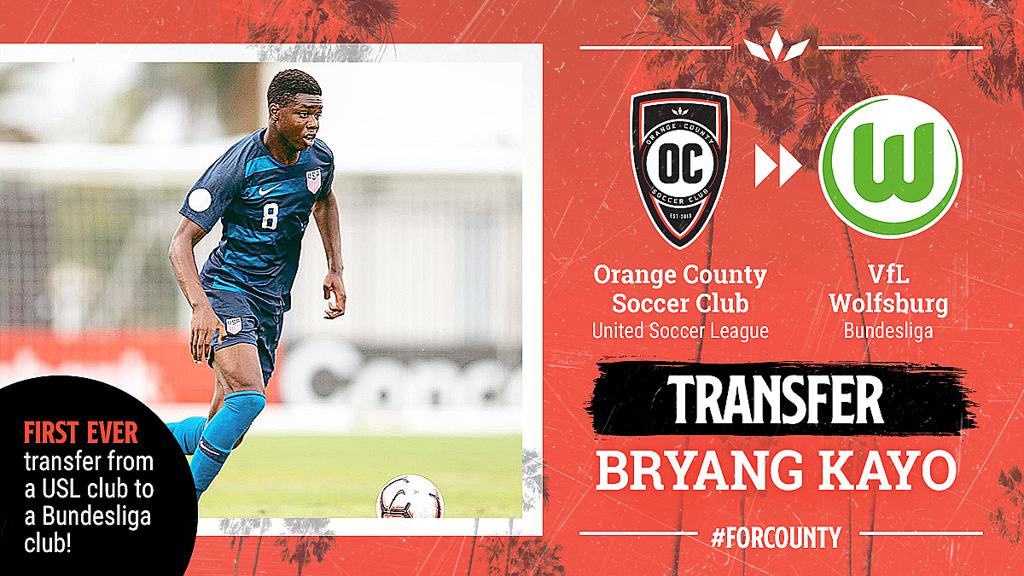 The transfer is a significant milestone for Orange County SC, as Kayo becomes the first-ever player to be transferred from the Club to an elite European team. Orange County SC also becomes the first USL team to transfer a player to the German Bundesliga. Since Orange County SC’s rebrand in 2016, the organization has placed a significant emphasis on player development with the promise to provide young talented players a professional pathway. The transfer marks the first player to come through the system and fulfilling the Club’s promise to provide a clear pathway for players to Europe.

Kayo, 18 joined the club in September 2019 and made the matchday roster numerous times before being selected to represent the U.S. at the 2019 FIFA U-17 World Cup in October. He made his U-17 World Cup debut against the Netherlands, coming on as a second-half substitute.

Kayo will now join up with VfL Wolfsburg and initially play with the Bundesliga club’s second team, WFL Wolfsburg II, who competes in the Regionalliga Nord league. Per club policy, the terms of the deal will not be disclosed.

Orange County Soccer Club is Orange County’s only professional soccer team that is part of the United Soccer League (USL), the fastest-growing Division II professional soccer league in the world. The USL is comprised of 36 teams across the United States. The team plays its home games at the Orange County Great Park’s Championship Soccer Stadium, located in Irvine, CA. Nestled in the heart of the Great Park, Championship Soccer Stadium has a capacity of over 5,000 for Orange County SC matches. Orange County SC was one of 12 founding members of the USL during its inaugural 2011 season. The preceding club, Orange County Blues, won the 2015 Western Conference Regular Season Championship and reached the Western Conference Semi-Finals of the USL Playoffs in back-to-back seasons. Team owner and Chief Investment Officer of LARO Properties, James Keston, purchased and re-branded the team in 2017. Keston, who actively oversees all operations of the team, is dedicated to providing a pathway to professional soccer and a world-class soccer organization that focuses on the fans, players and youth clubs of Orange County.