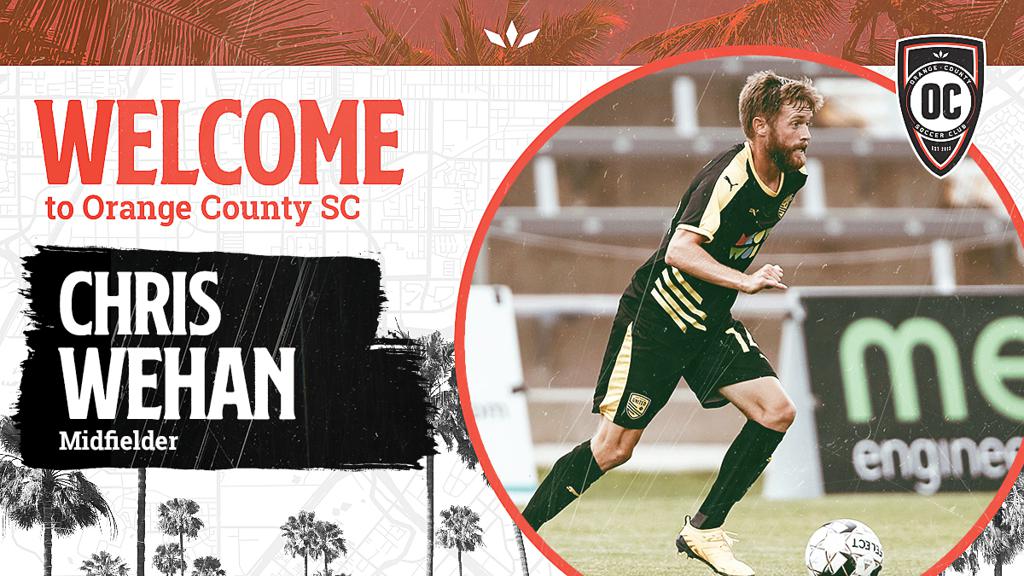 “I am very excited that Chris has signed for Orange County,” said OCSC Head Coach, Braeden Cloutier. “He has been a player that I have admired for several years. I look forward to adding his creativeness and professionalism to our group.”

Wehan, 26, from Laguna Niguel, CA, signed his first professional contract with Reno 1868 FC in 2017, where he was named USL Assist Champion, USL First-Team All-League, and USL Rookie of the Year, with 12 assists and 8 goals. In 2018 Wehan signed with the Reno 1868 MLS affiliate San Jose Earthquakes where he made 6 appearances and 2 starts prior to being loaned back to Reno 1868 FC for the remainder of the 2018 Season. In 2019 Wehan became an inaugural member of the 2019 USL expansion team New Mexico United where he recorded 16 goals and 11 assists over 2 seasons as an attacking midfielder and established himself as one of the best players in the USL Championship.

“I am elated to join Orange County SC, a club I used to watch firsthand,” said Chris Wehan. “I am extremely grateful and excited for this opportunity to move home to Southern California and play for this club that has done so well in the Championship over many years.”

Growing up Wehan played club soccer for Orange County United FC and spent one year with the Cal South Olympic Development Program team where he earned a Region IV championship title. He was a standout at Aliso Niguel High School before playing at the University of New Mexico, where he scored 31 goals and was named First-Team All-Conference USA. In 2013 Wehan played for the OC Blues Strikers in the PDL.

“Chris is a first-class professional and we are very proud to bring him back home to Orange County,” said OCSC President of Soccer Operations Oliver Wyss. “Chris’ quality and leadership will have an immediate impact on and off the field for our club and community.”

Orange County Soccer Club (OCSC) is Orange County’s only professional soccer team and is part of the United Soccer League (USL), the fastest-growing Division II professional soccer league in the world. The USL is comprised of 35 teams across the United States. The team plays its home games at the 5,500-seat Orange County Great Park Championship Soccer Stadium, located in Irvine, CA. OCSC’s strategic partner is Rangers Football Club of Glasgow in the Scottish Premier League. OCSC signed the youngest male in United States soccer history to a professional contract, Francis Jacobs, in 2019 at the age of 14. The team also executed the first-ever player move from the USL to Wolfsburg of the German Bundesliga with Bryang Kayo in 2020. OCSC’s preceding club, Orange County Blues, was one of 12 founding members of the USL during its inaugural 2011 season. Team owner and Chief Investment Officer of LARO Properties, James Keston, purchased and re-branded the team in 2017. Keston, who actively oversees all operations of the team, is dedicated to providing a pathway to professional soccer and a world-class soccer organization that focuses on the fans, players, and youth clubs of Orange County.