Irvine, CA (February 4, 2021) - The Orange County Soccer Club announced today a new initiative to support communities in Orange County to stay strong together during these trying times. OCSC along with the club’s Hispanic Advisory Board is kicking off the OCSC #JuntosMásFuertes campaign, an initiative targeting diverse Non-profits to support through philanthropic engagement. This campaign ties in the love for soccer and the arts through a #JuntosMásFuertes custom t-shirt sale campaign, the OCSC Hispanic Advisory Board activated local artist, Hugo Cesar Chavarria, to curate a design that captures the strength of the Orange County Soccer Club’s community. Sales of the shirt will benefit the Orange County Educational Arts Academy in Santa Ana. 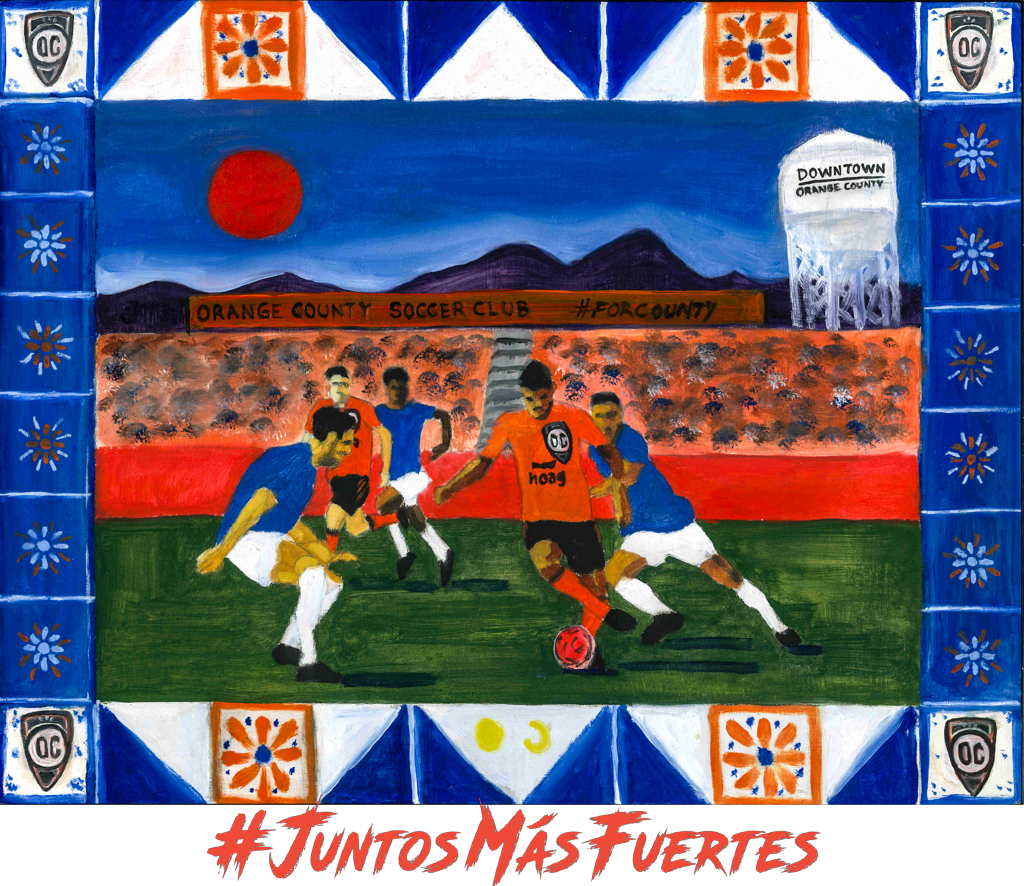 “The goal was simple. We wanted to connect the OCSC brand to the rich art history in Downtown Santa Ana and use this project as an opportunity to celebrate the contributions of local artist.”, said Jeff Garner, President of Business Relations.

The Non-profit they have decided to support in 2021 is the Orange County Education Arts Academy (“OCEAA”). OCEAA was founded in 2005 by a group of dedicated educators, parents and community partners who wanted to provide a well-rounded education to diverse students. OCEAA is a dual immersion public charter school serving approximately 630 students in grades TK-8 in Santa Ana. Their mission is to nurture all learners to become creative, critical thinkers by providing high quality standards-based instruction through the arts, technology, language and culture.

OCEAA’s Executive Director, Mike Limon, said, “We are beyond excited about this partnership and we’re looking forward to inspiring our community to stay strong and fuerte together during these challenging times.”

Hugo, a self-taught artist from Southern California, has been creating art for seven years and specializes in portraiture. Working with oil paint and charcoal, his work is known for capturing the feeling and gaze of his subjects making him highly sought after. The result is a beautiful piece that not only incorporates the #JuntosMásFuertes message, but also intertwines the OCSC Crest in a mosaic border alongside one of the more iconic landmarks in North OC - the Santa Ana Water Tower.

Hugo stated, "I am very honored to be able to create with OCSC, to give back to the community and its young creatives. Community is very important, it inspires, it creates culture and unity. I hope that my art inspires, just like the community of Santa Ana has inspired me with its unity and heritage.”

Since the 1980’s, Santa Ana has been the art destination for Orange County, attracting artists, art lovers and art professionals to the area and the Orange County Soccer Club plans to continue their support in preserving this culture with future projects.

The limited-edition shirts are $20 and will be on-sale through the month of February with Orange County Soccer Club donating the net proceeds to the Orange County Educational Arts Academy in Santa Ana.

They are available for purchase at https://bit.ly/OCSCDASH

There are 3 delivery options:

Option 1) Pick up from OCEAA (no additional cost, at a date forthcoming)

Option 3) Donate the t-shirt to OCEAA (no additional cost)

Please email [email protected] if you have any questions.

Orange County Soccer Club (OCSC) is Orange County’s only professional soccer team and is part of the United Soccer League (USL), the fastest-growing Division II professional soccer league in the world. The USL is comprised of 35 teams across the United States. The team plays its home games at the 5,500-seat Orange County Great Park Championship Soccer Stadium, located in Irvine, CA. OCSC’s strategic partner is Rangers Football Club of Glasgow in the Scottish Premier League.  OCSC signed the youngest male in United States soccer history to a professional contract, Francis Jacobs, in 2019 at the age of 14.  The team executed a number of player transfers from the USL to major European clubs in 2020, including to the German Bundesliga (Wolfsburg) and to the Scottish Premier League (Rangers FC).  OCSC’s preceding club, Orange County Blues, was one of 12 founding members of the USL during its inaugural 2011 season. Team owner and Chief Investment Officer of LARO Properties, James Keston, purchased and re-branded the team in 2017. Keston, who actively oversees all operations of the team, is dedicated to providing a pathway to professional soccer and a world-class soccer organization that focuses on the fans, players, and youth clubs of Orange County. For more information about Orange County Soccer Club, and to experience professional soccer in the OC, visit: http://www.orangecountysoccer.com.  For more information about the United Soccer League, visit: http://www.uslsoccer.com.

OCEAA was founded in 2005 by a group of dedicated educators, parents and community partners who wanted to provide a well-rounded education to the students of Orange County. OCEAA is a public charter school serving approximately 630 students grades TK-8, is funded directly from the state based on student attendance and is subject to the same accountability measures as other public schools. Our mission is to nurture all learners to become creative, critical thinkers by providing high quality standards-based instruction through the arts, technology, language and culture.