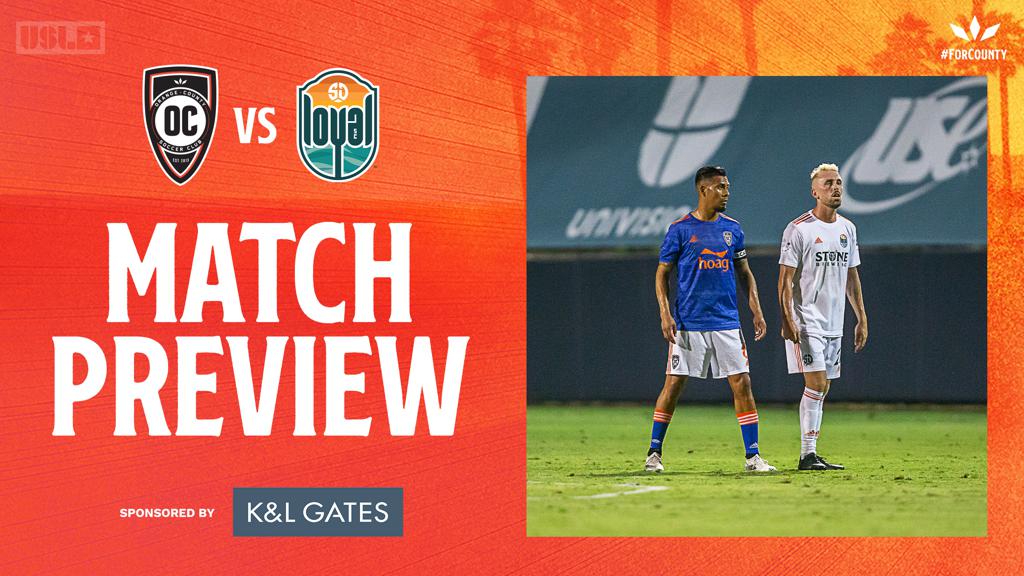 Kickoff is at 7:00 p.m. PT on Wednesday, October 20th at Championship Soccer Stadium in Irvine, CA

The match will be streamed on ESPN+ and COX Yurview

THE LOYAL ON OUR SOIL

Orange County SC hosts San Diego Loyal SC in a highly anticipated Pacific Division midweek matchup on Wednesday, October 20 at Championship Soccer Stadium in Irvine. It is the first time since early June that the Loyal travel up the 5 North and across the county line where Ronaldo Damus scored the equalizer in the 1-1 draw.

ONE POINT AND THEN SOME

After a pair of OCSC 1-0 victories last week against Phoenix Rising FC and Oakland Roots SC, the boys in Black and Orange can clinch a berth in the 2021 USL Championship Playoffs with at least a draw or a win against their southern rivals. With a win, OCSC can come within one point of the coveted second seed in the Pacific Division currently held by San Diego with both teams having two games to play after their final meeting on Wednesday. The second placed team will have a home playoff game against the third place team from the Mountain Division.

When OC and SD kick off Wednesday, it will be just one day shy of the two-month anniversary of interim head coach Richard Chaplow’s first game and win as the team’s gaffer. Chaplow led OCSC to a 2-1 come from behind win against San Diego in a tough road environment to reinvigorate his side heading into the latter half of the regular season. Since then, Chaplow has gone 6-3-2 putting OCSC well in control of their own destiny for a postseason berth.

Guess who scored, scored again!? It’s Ben Mines, tell a friend! With his third goal in three consecutive matches, Mines put away the winning goal in OCSC’s 1-0 victory in front of a sold out crowd in the Bay Area against Oakland Roots SC on Saturday, October 16. Forward Ronaldo Damus was credited with the assist as he passed the ball through the six yard box where Mines was there to hit at a sharp angle with his right foot. The goal came minutes after OCSC had a penalty kick goal called back and saved on the retake.

OCSC concludes their 2021 USL Championship regular-season home schedule with a Saturday evening match against Las Vegas Lights FC on October 23. Before the match, OC will be hosting a Scottish Festival full of food, drinks, music and family fun for all fans to enjoy. Event starts at 11am at the Orange County Great Park.